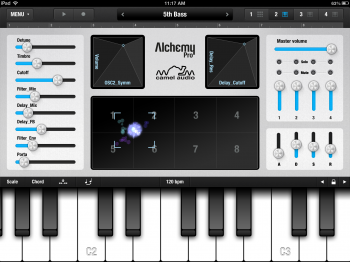 Camel Audio is the developer of the Alchemy synthesizer, now at version 1.5, which is a sample manipulation synth with a clever instrument design and GUI that’s won a lot of fans. Now Camel has translated its Alchemy cleverness into an iOS app – and the result is Alchemy Mobile. The basic app is free and does some nice sounds. Upgrades to the Pro version expand the palette of sample libraries or you can buy individual packs of library sounds. Pro also gives you extra functions like Export, Copy and a Swing setting – basically a few subtle, but important features.

As always with apps that come with a good pedigree, we ask does Alchemy Mobile really work, or is it a mere shadow of the bigger sibling?

I’d best explain first, for mine the key to the original Alchemy 1.5 performance is the Remix section, being two X/Y parameter grids and the Remix pads. The X/Y grids can determine a mixture of things like delay, pitch, reverb… a whole host of effect settings you can assign that are both simple or obscure. For each sound there are other assignable parameters that can be set via slider controls, for example resonance and cutoff. Any combination of the X/Y grids’ position and the slider controls can be saved to one of eight Remix pads in a manner similar to a preset. Next, as you play the keys, you can drag across those eight Remix pads effectively morphing smoothly (not switching abruptly) between the saved presets on each pad. It creates some cool sounds you’ll never reproduce using a straightforward keyboard.

The potential combinations are endless, however this is the one important area where Alchemy Mobile is cut back compared to the full version. Don’t panic, all the above features are present in the app, except the Remix settings are locked in to each Library sound courtesy of the sound designer responsible – you can’t reassign the parameters controlled by the sliders or the X/Y grid. You can change the values, but not save them, meaning the controls will snap back to the original positions as soon as you move the morphing control that overlays the Remix pads.

If this suddenly seems a bit limiting – not at all. The Remix pad morphing control provides all the variation you’ll ever need anyway and Camel’s sound designers have a rough idea what they’re doing, so you can rest assured the assigned controls are exactly what’s required. All the included sounds are sourced from a limited Factory library, then as mentioned above beyond these you can add in-app purchases of extra libraries from a good cross-section of genres or buy a whole bunch in one swoop with the Pro upgrade. Either way, each library – in fact, each individual patch – has been carefully designed by Camel.

Do The Four Track Maths

Next, you can build an entire tune using an internal 4-track sequencer. Alchemy Mobile has four tracks that can host a library patch each and you can record your playing in real-time on all four. The tracks will also record any morphing you perform on the Remix pads. Tempo, Swing (Pro only) and Quantize settings are included and a rudimentary 4 channel mixer for the respective tracks. Theoretically there is no limit to the length you can record aside from your iPad’s resources and the separate tracks will relate length-wise to each other, if you do the maths. For instance a 4-bar loop on track 2 will happily repeat itself in response to an 8-bar recording on track 1, or an 8-bar loop will play three times within a larger 24-bar loop elsewhere. Depending on the patch you’ve assigned to a track, the playing surface is either an array of 16 drum pads or a traditional piano keyboard.

With the latter piano keys Alchemy Mobile offers some nifty cheating. First you can choose a Chord mode where the synth automatically plays either major or minor chords rather than single notes. Or you can take things further by picking a musical scale and all the keys/notes that don’t belong to that scale disappear. For two-fingered keyboard players like myself you can fool around with rhythms and even solos without fear of hitting a bad note. Add in the Remix pads and I’m starting to sound like Rick Wakeman after a couple of pints of Guinness… (ah, apologies to probably most readers – Rick Wakeman is an iconic progressive rock keyboard player with a career spanning 40 years, and a founding member of Yes). It’s a lot of fun and at the same time you can make some damned impressive sounds.

The fact is there’s no comparison to be made between Alchemy 1.5 and Alchemy Mobile. My bad –we need to shake the habit of regarding apps like this as lesser, mobile versions of the larger originals and instead evaluate each app in its own right. Looking at Alchemy Mobile this way, it’s a very handy instrument that can add something different to your studio projects. You can create a complex loop and Export it for use elsewhere (again, Export is a Pro-only feature) or hook up a good interface and play Alchemy Mobile in real-time into your DAW. Either way, you almost can’t avoid producing something unique, because of the Remix pad interaction. Unique is good, right?

Like any synth with factory-provided presets, you’re not going to love every patch you get, so the inability to tweak those sounds that are lacking into something usable might be disappointing. That’s about the only drawback of Alchemy Mobile, which otherwise has some great patches and a GUI that opens the door for non-keyboard players to inject some exciting synthesizer tracks into your studio projects. I’ll say that Alchemy Mobile isn’t an app – it’s a musical instrument.