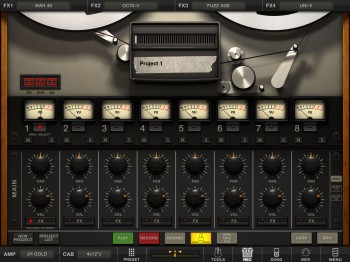 Just to be clear – and yes, it’s a little obvious – the difference between the various types of Amplitube for iPad and “Amplitube Free” as it appears in the app store is, of course, the features included. You can buy Amplitube for iPad from IK Multimedia as a fully-featured app any time you like for $20.99 or you can get one of the signature versions, like the Jimi Hendrix, Slash or Fender bundles for $15.99. However, you can start with Amplitube Free, as I have, which is exactly the same thing without a full selection of stomp pedals and you then add through in-app purchases all the guitar goodies you want including – what I’m interested in here – the eight track recording facility.

Up against the likes of Auria and Cubasis (we’ll be looking at them soon) those eight recordable tracks on a virtual reel-to-reel machine seem very retro indeed – the GUI has a cool vintage look about it too with rotary knobs and VU meters. Trust me, herein lies the joy of Amplitube. It’s been said before and I’ll say it again – there’s something kind of liberating about starting a recording session where you have no Get Out Of Jail cards in the form of extensive DAW editing. Amplitube doesn’t give you a time-line with waveforms clips to watch with one eye; you have to listen to what’s going on and, if you make mistakes, forget about any cut-and-paste function for slotting in a previous verse or chorus. It’s exactly like having an eight-track tape machine in front of you, patched into a somewhat basic analogue mixer. The emphasis is on capturing a good performance and great tones as you play (although you can switch between amplifiers and effects post-recording) and making the most of those eight tracks.

Plainly, Amplitube is for guitar players, so the great tones thing is easy since Amplitube was a pioneer of creating guitar amp and effects simulations. IK Multimedia has a large range of authentically-modeled stomp pedals for the app which will cost you $1.99 each. The in-app store provides a complete explanation of how each stomp pedal originated, sometimes its history, who uses it (or used, in the case of Mr Hendrix) and likely applications like metal, grunge or just annoying your neighbours. Likewise the various amplifiers you can buy, which vary from between $2.99 and $4.99, are displayed in the store along with backgrounds and a brief history lesson which make choosing a new sound much easier and kind of fun. Some of the in-app store are only available there and aren’t included in any of the bundles.

Beyond playing your guitars Amplitube tries to be obliging, like providing a Loop Drummer facility. Loop Drummer offers eight different genres (country, punk, etc) with eight variations of patterns such a Main A, Main B, Fill B and so on. As usual, the problem with these kinds of loopers is the limited selection of grooves, plus you risk getting influenced by the drum loop rather than finding some drumming that fits the song idea in your head. Still, Loop Drummer is perfect for practicing your playing.

There’s a better way. If you’re working on a specific song project in another DAW with completed drum tracks, and you want to experiment in Amplitube, the app will let you Import files. Using the WiFi menu is easiest with Amplitube creating a transfer window in your browser. Otherwise with a cable connection the process is a little fussy, but typical of most iPad software. It involves connecting to the host computer, using iTunes File Sharing (as is often the case) to earmark the target file to associate it with Amplitube, then transforming the imported file into a new Amplitube song. Accepted sample and bit rates top out at 44.1kHz and 16 bit wave files, while Amplitube “prefers” MP3 files (for some reason – maybe just to save space). So a possible scenario would be to Import a drum and bass mix-down into Amplitube and you have seven free tracks of guitar to play with – seven, because the good news is that Amplitube only needs one of its eight tracks to replay a stereo mix. If you’re inspired to create something brilliant an Export function lets you move those tracks back into your main DAW – albeit again at the 44.1 kHz, 16 bit limit.

Other handy functions are Bounce and Clone. Bounce is to crunch your eight tracks into just the one freeing up seven again. If that is a bit too final for you Clone lets you create a back-up first.

For the old hands, it’s all very reminiscent of squeezing the most out of a Fostex or Tascam cassette multi-track recorder, which let’s admit always drew a fine line between creativity and sheer frustration. With Amplitube’s modern digital functions of exporting and backing up files before committing to any bounce-downs, this eight-track recorder takes all the angst out of the recording process and lets you concentrate on playing. If you can’t find the right sounds the in-app store purchases are cheap, but the actual products are high-quality – there’s that IK Multimedia pedigree showing through. With the Amplitube guitar rigs and virtual reel-to-reel it’s tremendous fun and might just be the retro tonic you need to keep your hands on the guitar and away from the DAW hotkeys. 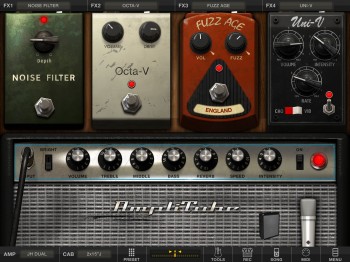 Price: Prices vary depending on the Amplitube bundle you choose. Check the Apple App store.

Important note: IK Multimedia’s iRig and iRigHD hardware guitar interfaces have Amplitube included. These interfaces ensure a solid, good-quality connection between your guitar and the iPad, so unless you already have decent iOS audio hardware I recommend them as probably the best way to get Amplitube.