AURIA IS THE REAL THING 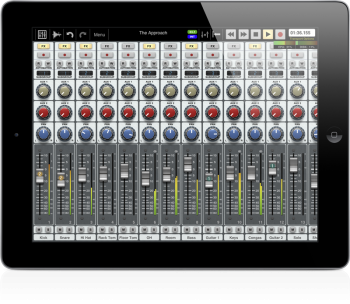 Current thinking is that no one would really use an iOS-based DAW for a complete project – like, from start to finish, right? Instead, despite all the hype from app developers, in the real world it’s all about recording ideas and song concepts on the road that you’d later redo in the studio. Perhaps with a good iOS interface and app you might record a “keeper” guitar track or vocal that you transfer to the studio, but that’s all. Okay, now Auria might just change that thinking. With the ability to play 48 mono or stereo 24bit/96 kHz tracks simultaneously, record up to 24 of those tracks simultaneously (through a supported USB multichannel audio interface), and edit and mix with familiar tools and full parameter automation, Auria provides a full platform for iPad multitrack recording. Auria’s 64-bit Double Precision architecture ensures ample headroom for plug-in processing and mix summing, transforming your iPad into a recording and mixing studio with sound quality that rivals most DAWs. The depth is in the details, but at the coal-face you get a vintage-inspired channel strip on every channel, a dedicated master channel strip, optional add-on effects engineered by companies such as PSPaudioware, Overloud, FabFilter and Drumagog, and support for Dropbox, Soundcloud, AAF, and MP3. Auria LE only allows 24 channels playback and 8 simultaneous recording tracks – limitations that many users would rarely reach anyway, however the 44.1KHz sample rate limit is an issue. Most studio sessions are at least 48KHz, so buying the full Auria version is recommended. At $51.98 (Auria LE $25.99, in-app upgrade is $25.99 too) it makes Auria one of the more expensive apps, but look again at what Auria can do and it’s a bargain. This ain’t your $1.99 one-of-a-zillion app.