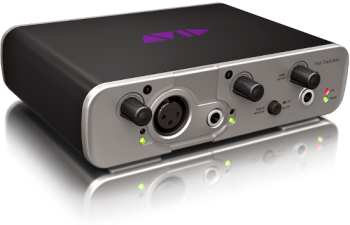 Avid’s new Fast Track Solo and Fast Track Duo USB interfaces are the kind of tough, mobile devices we see a lot of now – aluminium chassis, re-enforced controls and a scratch-resistant finish. Something you can stuff in your laptop bag and it’s not going to get broken. To confuse everyone the Solo provides two inputs via a balanced, standard  XLR preamp and a second high-impedance instrument input, while the Duo gives you two of each for a total of four. We’ll assume the Solo and Duo bit is a suggestion of how many musicians need apply, not inputs. There are also some other significant differences – it’s not just a matter of extra inputs – but before I go into details let’s look at what I reckon is the real attraction of these interfaces.

Both the Solo and Duo are MFI, meaning Made For iPad (or iOS, take your pick, but these only work with iPads), and have a tablet connection on the rear which lets you hook up your iPad through the 30 pin connector without any drivers required. For me, this made the Fast Track Solo a great solution to my iPad interface problem – you get a quality preamp, instrument input, headphones, phantom power and RCA outs for your iPad, all for a RRP in Oz of $197 ($329 for the Duo)… it’s almost like you get Pro Tools Express and a USB interface for your computer chucked in to seal the deal. What can possibly go wrong?

For a start, you can own an iPad 4 like I do and have a Lightning connector, not a 30 pin to contend with. Avid supplies the 30 pin to Fast Track cable and I certainly don’t expect Avid to include a Lightning-to-30 pin adapter, too – I’m keeping that beef exclusively for Apple and the iPad 4. Of course, I tried a third-party adapter and after much experimenting had to accept it simply wasn’t going to work. Getting a genuine adapter from Apple eventually solved the issue instantly and my iPad apps were up and running. There is no “Pro Tools app” by the way. Avid say that the Fast Track interfaces will work with any iOS recording app worth its salt and I had no problems with several.

Something to know is exactly how the iPad connects to the Fast Tracks. The aforementioned cable goes between the iPad and the interface’s tablet port. You also need to connect a standard USB cable from the iPad AC adapter to the USB input, effectively powering the Fast Track (which are buss-powered by a normal computer). This sort of spoils the mental ideal of sitting next to a swimming pool with your iPad and Fast Track, knocking out the next Grammy-winner – you’re going to need mains power. Mind you, most iOS compliant USB interfaces need an external power source too and Avid’s solution for this is clever.

Back to the nuts and bolts of the Fast Tracks, the preamps have a slight warmth that added some nice character to both a vocal recording and plugging an Epiphone Les Paul straight in. There is heaps of headroom for each too, except the threshold at which the preamps clipped seems abrupt and flirting with red LED danger isn’t an option. The headphones volume was adequate for my 600 ohm cans, so more popular, low-impedance headphones will be fine. 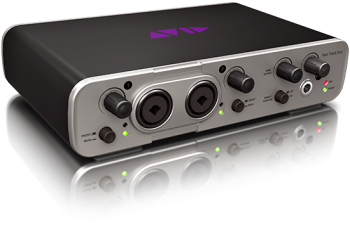 It was a little disappointing (not to mention perplexing until I figured it out) to discover that plugging headphones into the Fast Track Solo disconnected the RCA outputs on the rear. Herein lies one difference between the Solo and Duo models with the latter having L/R 6.5mm outputs on the rear with a separate volume control, unaffected by plugging in headphones. The Duo also has XLR combo inputs on the front with two extra 6.5mm instrument inputs on the rear that are activated by a switch on the front panel. Both models give you a Direct Monitor switch.

A feature that struck me immediately was the wide, rubber strips on the bottom of the Fast Tracks that act as feet. Good idea – Avid realise these mobile interfaces will be put in some precarious positions and gave them the best chance of not falling off. The front panel knobs are just a little too prominent for mine risking getting snagged on gear as you might haul a Fast Track in a hurry out of a bag full of crap. Likewise, the phantom power switch on the rear looks vulnerable. But these are small criticisms that shouldn’t matter with a bit of care by the users.

You get Pro Tools Express included… sort of. In fact, you get an Activation Code and an iLok, and it’s up to you to handle the 790Mb download for the PTE and 1.8Gb Instrument package. Pro Tools Express is certainly, as Avid claims, a good entry-level introduction to Pro Tools – it’s much more than a “Lite” version – but through the full compatibility with its bigger Pro Tools siblings Express will let you export that killer guitar solo across to a full studio without any fuss.

There’s a lot of stiff competition in the market for USB interfaces like the Fast Track. The MFI connection makes a huge difference and while Avid are selling these as mobile computer devices, anybody looking for an iPad interface should give them serious consideration, too. The bundle of a USB interface, Pro Tools Express and an iPad interface for under $200 is hard to pass by.

Go to www.avid.com for all the specs on both and a comparison chart on Pro Tools Express as against the rest.