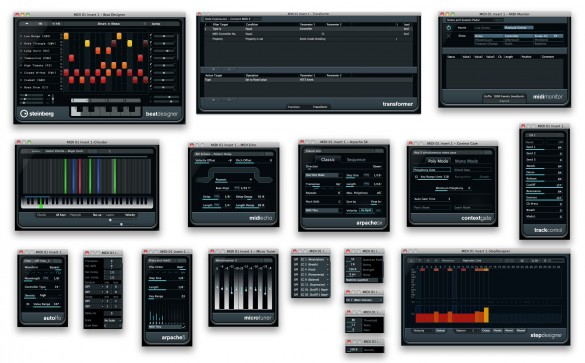 The boffins at Steinberg have been quietly busy. Late last month Steinberg released Cubase 6.5 and within a few days announced we’ll soon be offered the new Nuendo Live as well.

Cubase 6.5 has some significant improvements and extra features compared with its predecessor, but apparently not enough to rate a whole new integer of its own. It’s a bit of a mystery why a particular software upgrade – Steinberg isn’t alone here – is deemed to be worth only a ‘.5’ label, especially when it’s not a freebie, however greater German minds than ours have worked on this and we can only assume they know exactly what they’re doing. Notably, a v6.5.2 patch is already available for download, but that’s also par for the course nowadays. It’s next to impossible for any software developer to cater for the zillion different PC and Mac configurations out there and an almost immediate patch release is bound to be needed.

New tricks and treats in Cubase 6.5 include a couple of VST instruments, the first being the Retrologue Virtual Analogue Synthesizer – all those vintage synths you couldn’t <give> away on eBay are in <virtual> demand, at least. The Padshop Granular Synthesiser is one of those extremely clever instruments that is so complex and complicated that the synth nerds will love it, while the rest of us will never dare stray beyond the presets menu.

Similarly, two new intelligent filter plug-ins might interest only the dedicated users, but 50 new signature sounds and presets in Cubase’s own VST Amp Rack guitar amp simulator will have a broader appeal. No one can resist trying out more grunge guitar patches, right?

The DAW’s comping ability has been tweaked, as has the Audio Warp functions. A direct link with Soundcloud has been added, a FLAC compression codec and 64-bit support for Rewire. Last but not least, while Cubase 6.5 may not be made <in> China, it’s been made <for> China. Version 6.5 is the first Cubase release to include a full user interface in simplified Chinese language (there is such a thing?).

The impending Nuendo Live is an intriguing one. As the name suggests NL is designed to provide an optimum experience when you’re recording live (and studio, of course) performances with the software’s interface offering all sorts of visual, virtual goodies to give you complete on-the-fly control over any recording session. It’s a significant departure from the standard Nuendo which still exists and, as you probably know, is very much a highly featured <post>-production application with a strong focus on signal routing, file management (like sound effects libraries) and complex mixdowns – think film and television post here. The two Nuendos are pretty much chalk and cheese – has this been done deliberately? Without a doubt. In fact, all the blurb on Nuendo Live makes a big deal of its recording capabilities without even mentioning mixing down anything at all. There is a close, ‘seamless’ association with Yamaha’s new CL consoles and this suggests that Nuendo Live is really meant as a straightforward capture software for these desks and nothing else – but hell, Steinberg has developed Nuendo Live so it’ll work with anything, anyway.

So the bottom line here is that while you might initially get excited by the concept of a simplified Nuendo, it appears that Nuendo Live and standard Nuendo are poles apart and you’ll always need something like the latter (or Cubase) to transfer your files across to and make something of your session recordings.

Nuendo Live is supposed to be available in the “summer of 2012” with Steinberg adopting that annoying trait of equating the calendar with the seasons, which gives them a huge fudge-factor in the timing, not to mention confusing those of us on the opposite end of the planet. Still, despite first impressions suggesting that Nuendo Live might be disappointingly lacking in many post-production features to the point of not being able to create usable mixdowns, it’ll be very interesting to see what Nuendo Live can actually do.