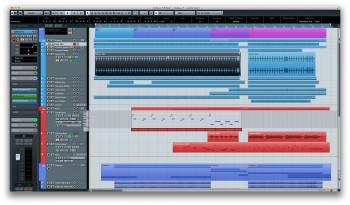 The gloves are off. Hot on the heels of Cakewalk’s news of Sonar X2, Steinberg has announced Cubase 7 and Cubase Artist 7 and since the Steinberg DAW has advanced a whole number this time (rather than the last 6.5 release) this is, as you’d expect, a major update. Top of the feature list is a completely new mixer, plus brand-new tools for composing, more effects, more content and “countless” workflow enhancements. The MixConsole mixer is promising “never-before-seen” transparency, fidelity, and functionality with full-screen mode and scalability for allowing seamless adjustment to small and large-scale displays alike. With Channel Zones, users are able to specify which channels and in which order they are to be displayed on the new mixer, while View Sets offer immediate recall of EQ, dynamics, sends and inserts. Other advantages of MixConsole include customisable track icons as well as Control Link and Quick Link for interlinking channels and parameters. Channel settings can be drag-and-dropped, there’s A/B comparison, global bypass on effects, plug-in search and integrated control room functionality.

A new channel strip module is designed to avoid opening a bunch of separate plug-ins or an effects chain just for a basic track sound. Built into a single plug-in you get high and low-pass filters, noise gate, the four-band StudioEQ, three compressors, a spectrum analyser, tube/tape saturation, a brickwall limiter, maximiser plus 150 factory presets created by US producer Allen Morgan – yes, that lot should keep you busy for a while.

Chord Track sounds interesting. It’s a dedicated track within the Project window where Cubase identifies the music’s harmony structure and provides chord and scale information to both MIDI and audio tracks that have been processed with VariAudio, and these in return automatically follow any harmonic adjustments in Chord Track. VariAudio is one of Cubase’s own effects and has been enhanced to work seamlessly with Chord Track, allowing multiple-part editing within a single editor and harmonising of lead vocals in choral arrangements. Another new feature exclusive to Cubase 7 is Chord Assistant for bridging chords and generating harmonic chord progressions. Implemented in both Cubase 7 and Cubase Artist 7, the Hermode tuning technology adjusts flaws of traditional well-tempered scales through dynamic retuning (it’s complicated… simply put, it ensures that those generated harmonics of a played note are also in tune. Otherwise, harmonics aren’t necessarily perfectly in tune when the instrument has an equal-tempered scale like a fretted guitar or keyboard).

You also get Voxengo’s studio-grade 64-band spline CurveEQ, EBU R128 standard compliant loudness metering and the latest version of MixConvert for individual down-mixing in high quality. Cubase has long been offering a complete in-the-box DAW solution and Cubase 7 retains all the usual Steinberg suspects with regards to VST Instruments and samplers — it’s become a long list and some have been included since the earliest versions. Release date for Cubase 7 is slated for 5th December. The full version RRP in Australia is $599. Upgrade prices and Artist versions are available, too and there’s a freebie update for anyone who purchased Cubase 6.5 after October 25th and, until they read this sentence, were starting to feel robbed.