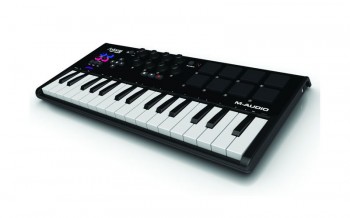 The Axiom A.I.R. Series’ name reflects the integration of the M-Audio Axiom product line with A.I.R. Music Technology, the German-based developers of virtual instruments and audio processing tools (who Avid also moved across to InMusic). The partnership promises a new level of virtual instrument control in a line of MIDI controllers.

The four Axiom A.I.R. models each have distinctive differences without treading too much on each other’s toes. The Axiom A.I.R. Mini 32 is made for music creation on the move, with an ultra-mobile form factor, 32 velocity-sensitive mini keys, eight trigger pads and assignable low-profile knobs. The Axiom A.I.R. 25 is a hybrid keyboard/pad controller, giving beat makers and groove creators space-efficient yet comprehensive control with 16 backlit drum pads, illuminated knobs and synth-action keys. The Axiom A.I.R. 49 provides comprehensive control over any DAW for musicians of all types with an expanded layout of long-throw faders, illuminated buttons, backlit pads and 49 synth-action keys. Finally the Axiom A.I.R. 61 delivers all the same expanded features as the Axiom A.I.R. 49, but with 61 keys featuring TruTouch semi-weighted action. Each Axiom A.I.R. controller will come with Ignite, which was also developed by A.I.R. Music Technology. Ignite is a “discrete, standalone music ideation and creation software built from the ground up in an organic fashion”. It sounds more like your mum’s favourite soup recipe, but we’ll try to get our hands on an Axiom A.I.R controller and Ignite and let you know. The Axiom A.I.R. Series should be available around mid-October of this year. More info at www.m-audio.com is a little thin on the new A.I.R. models–no doubt the site will catch up any day now.