FROM TAPE TO DAW APP-STYLE 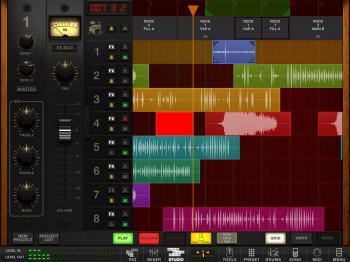 Good ol’ Murphy’s Law. Only about two weeks ago we reviewed IK Multimedia’s Amplitube For iPad (read review here) and in particular its Record function. We reckon with the virtual eight track reel-to-reel interface the GUI was rather cool and retro – and all those other groovy, funky words from the 1970’s. One thing the Record window encouraged was going back to musicianship, because there are no clips or editing functions to fix things. Just like the reel-to-reels of old, you simply had to play well in the first place. Well, IKM apparently don’t quite share our enthusiasm since with the latest Amplitube 3.0 release and in-app purchase is the Studio plug-in. Amplitube Studio provides the familiar Arrange window and tools of a DAW with clip editing functions such as copy, paste, normalize and others – including, of course, being able to shift, trim and crop recordings. You also get a slightly improved Track Control with a 3-way EQ and more integration with Aux sends. Amplitube Studio doesn’t replace the Record plug-in. You can still go down the retro path with that funky tape recorder as a separate plug-in. Studio is available as in-app purchase of $15.99 or, if you don’t already have a version of Amplitube For iPad installed, check out the many various bundles you can buy that might have it included. Full info at www.ikmultimedia.com

Cost: Prices vary depending on the Amplitube bundle you purchase.