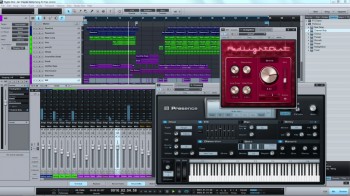 IF THIS MUCH STUFF CAN'T KEEP YOU BUSY...

In our sister mag’ Audio Technology Magazine we reviewed the original version of Presonus’s Studio 1, then the more recently-released upgrade called Studio One, Version 2, both very favourably. Studio One is a full-featured DAW, except Presonus have stayed away from including some of the weird, whacky and downright confusing capabilities that other long-established DAWs offer. In other words, the kind of features that all but the most ardent users will never bother with (yes, think nerd here). Presonus called it “bloat free” and it did a great job of sorting out what was important–and what could be left out–of a professional DAW.

Now there is Studio One Free, which has even more features trimmed away to keep it under the performance levels of the professional versions you’d pay for, but there is a lot of confidence to be had knowing SOF is still firmly based on such a good DAW. You can simply download SOF and activate it–and that’s it. It’ll work. You’ll need a decent audio interface and by the way, a Studio One Professional 30 day trial is buried in the download, too. Check it out and return back to SOF, if you don’t want to buy the Pro version.

Studio One Free is a brilliant way to start out with DAWs, but it’s also going to attract a lot of pro-users looking for a free mobile recording solution that will easily translate session files into whatever software they use back in the studio. That’s a high recommendation of its own.

You can find the download and comparison charts at www.presonus.com