HAMMER YOUR IPAD WITH THOR 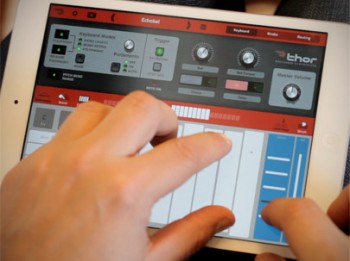 If you haven’t tried to get your head around Propellerhead’s Reason here’s a way to get a sample of what Reason is all about – a lot of musician’s swear by it, by the way. Propellerhead has released Thor for iPad adapting Reason’s flagship synth for the iOS platform with a custom mobile interface and expressive playing features, while promising still the same sound as in Reason. You get an innovative keyboard – meaning something more practical for the touch surface interface (read below) – and the same synthesis engine as its desktop cousin. It’s the same semi-modular synth with the same set of selectable oscillator and filter types and the same advanced routing of audio and modulation. Sound samish? Don’t blame us, it’s Propellerhead that’s trashed its thesaurus. Aside from a regular piano style keyboard, Thor features a keyboard that can be locked to specific keys and scales. Propellerhead is promoting Thor for iPad as a handy tool for existing Reason users, and any Thor patch created on the iPad can be transferred to a DAW computer, but it is a stand-alone synth too with Audiobus support, so even if you’re not a seasoned Reason user you can make some noise with Thor for $15.99.
AUSTRALIAN DISTRIBUTOR: (Propellerhead Reason) Electric Factory (ELFA) www.elfa.com.au