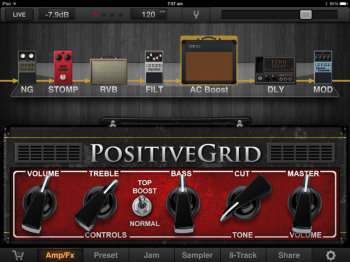 If you ever paused to wonder just how iOS devices or tablets can produce such amazing sounds, the theory has been around since the very first DAW software. Simply, (very simply) the electronics and processors inside your computer are far better and more capable than those found in, say, an effects pedal or an outboard hardware device like a rack-mount reverb unit. Your tablet isn’t even breaking into a small sweat trying to emulate a grunge pedal.

This all means I shouldn’t have been surprised at the quality of the JamUp Pro XT app sounds. Even so I was, because these are good – a step or two above the rest.

Developed by Positive Grid, JamUp Pro offers a variety of stomp pedals and amplifiers which, as you’re playing through them, can be recorded into an optional eight-track recorder, sampled into a loop to play along with, or you can use the Jam page to riff along with your favourite tracks (they must be included in your device’s music library). The choice of pedals and amps in the basic app isn’t huge and — certainly no surprise this time — you’re encouraged to buy extras from a large in-app catalogue. Normally this would be a recipe for disappointment, but the basic JamUp Pro XT has got some damned impressive sounds that will cater for all tastes from country to ear-shredding grunge before you need bother taxing your credit card any further. It can only bode well for what the extra, add-on pedals and amps have to offer. I’m having trouble deciding on what to choose among the smorgasbord of effects and amplifiers to find out. 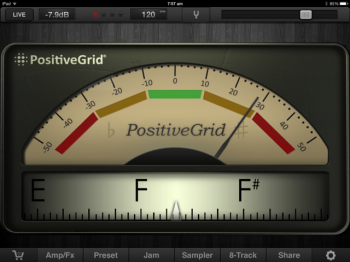 The GUI is literally big, taking full advantage of the entire screen giving you large, easily-adjusted knobs and controls. I was particularly happy with the tuner. JamUp Pro XT could be used live and in those situations a large, accurate tuner is a must. The graphics for the pedals are cool, yet still only show you the controls you need. A maximum of six stomp effects can be routed in any order to a single amplifier — you can’t have more than one amp head in the signal chain. Anything you create can be saved as a preset. 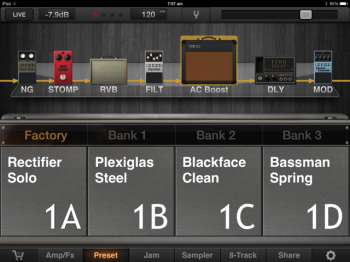 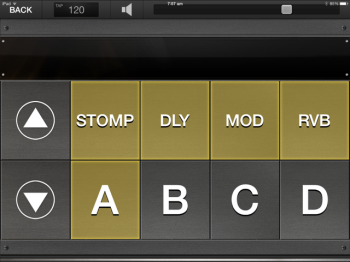 Presets are stored in eight groups of four (A,B,C & D) with a Factory and three User banks for a total of 128, which should do you for a while… The four presets can be displayed across the bottom of the screen or you can choose a Live display which is even better. Now the pads for switching presets are much bigger, plus you get on/off buttons for Stomp, Delay, Modulation and Reverb. Switching between presets, even those which are radically different with alternative amplifiers, is as seamless as any multi-effects hardware pedal and I was intrigued by how quickly I adapted to sneaking a tap on the screen during my playing, rather than using a foot-pedal — don’t panic if that scares you, Bluetooth pedal controllers are supported. 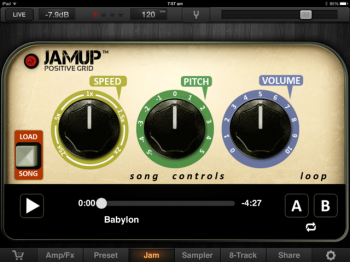 The Jam page offers a lot for stealing those elusive licks or practising your own stuff with controls for Speed (from 1/4 to double speed), Pitch and Volume. Locators for A & B positions allow you to loop over a section of song. You can only load one song at a time, but this happens fast and isn’t an issue. The Jam page is much better than loading a song into the eight-track and a handy inclusion for any working musician looking to practise their licks. 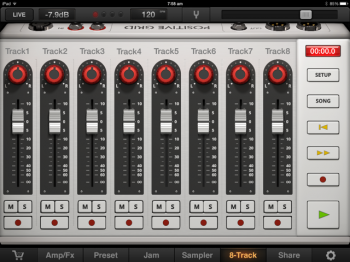 The optional eight-track recorder ($5.49) is like a straightforward tape machine. You can Import tracks from another app and through the usual file management methods bring in whatever you need to build your session, but you don’t get the kinds of Arrange window or Clip Manipulation that DAW’s provide. However, JamUp Pro XT is Audiobus compliant, if you prefer a DAW GUI for recording sessions. Having said that, I’ve mentioned elsewhere that these virtual tape-based recording apps are great for making you concentrate on what you’re playing, when you’re playing it and getting things right. The “fix it later” approach isn’t so readily to hand. By the way, JamUp Pro XT doesn’t incorporate iOS7’s inter-app audio, but it’s probably just an update away. 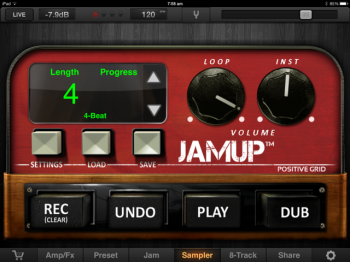 The only component of JamUp Pro XT that isn’t quite so intuitive is the Sample section, because some of the parameters like tempo and loop length need to be determined first before you dive in. It’s not difficult, the best approach is spend a few minutes reading the manual — that’s quicker than experimenting trying figure it out. What? Read the instructions? Are you crazy? Come on folks, just try it…

JamUp Pro XToffers some great sounds in the basic package and the Preset and Jam features work well. At $20.99 (Australian App Store) it’s a little more expensive than some of the rivals and maybe chucking in that eight-track recorder for free might balance the books. There is a free version available, but to be honest I gave up trying to figure out what limitations it has! Never mind, spend some dollars and get the real thing. For guitarists it’s all about the patches, the amps and the pedals, and the quality of these puts JamUp Pro XT among the best guitar player’s apps.