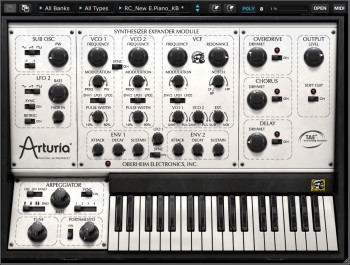 When it comes to synthesizers the Oberheim SEM was one of the original synths you could buy in the late 1970s and the difference between the Oberheim keyboards and the competition was Tom Oberheim himself. He was a whiz-kid with a soldering iron and a circuit board, and he experimented with synthesizer technology in a very “think outside the box” kind of way and came up with concepts and features we take for granted now.

The Oberheim SEM became a standard sound in music for decades–and obviously is much-copied now. So, not surprisingly software developer Arturia has brought out a faithful VST reproduction with more than a few added tweaks to improve on the original machine (or not–you don’t have to use them). Does it sound great? Of course. Does it look cool in a retro sort of way? Sure does. Is it easy to use?

Ah, this is where it gets interesting, because this is where I really like the Oberheim SEM. With the VST interface mimicking the original synth it becomes a lot clearer exactly what each control does. By default, the Oberheim SEM becomes a kind of “Synthesizers 101” tutorial that not only lets you craft your own unique sounds, but it lifts the fog of confusion on how synthesizers work, too. A lot of VST Instruments rely on clever and complex features to be better than the rest and that’s okay–it’s just a little bewildering when you’re confronted by these intricate GUIs. The Oberheim SEM by comparison is a return to synthesizer basics and you can learn a lot with its operation that comes in very useful elsewhere in your DAW.

I’ve already said it sounds great, but it’s worth reminding you that the Oberheim is a synthesizer, not a sampler, so it’s an electronic-sounding instrument with a huge range of cutting edge voices, lead sounds and pads. The added extras are what you might call more modern-style parameters for tweaking the sounds even further, yet remember you’re still dealing with generated waveforms. In other words, you’ll never hear a “real” piano with a synth like the Oberheim. 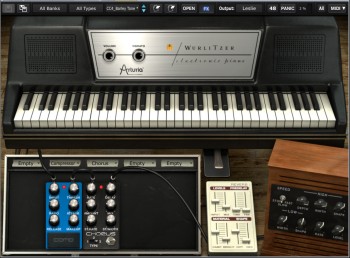 THE WURLITZER V WITH EFFECTS PEDALS AND LESLIE CABINET

You can hear a real piano–at least an electric piano–in Arturia’s Wurlitzer V piano VST. Like the Oberheim, the Wurlitzer became a mainstay in modern music “sounds” (along with the Rhodes piano) in the 1970s and has a unique quality that certainly deserved a faithful reproduction by Arturia. However, there isn’t a lot technically-speaking to deal with on an electric piano itself and aside from a neat box of virtual stomp effects pedals what you see (and hear) is pretty much what you get. There’s also a choice of running the Wurlitzer either through a guitar amplifier, a Leslie cabinet (pictured) or just direct and each of these significantly alters the sounds, so you’re getting plenty of different patches that can all be adjusted slightly or to extremes to make some great keyboards.

The real attraction of the Wurlitzer V is that ability to quickly (or instantly, in the case of any of the included presets) recreate those classic, signature sounds of the 1970s and onwards. To be fair, the Wurlitzer V is a VST instrument for true, electric piano enthusiasts and unless you can appreciate what the original Wurlitzer was all about you might find it a little too specialist. Maybe it’s worth digging out some music by Pink Floyd, The Doors, Stevie Wonder and Chicago–or more recently by Beck, Norah Jones and Panic At The Disco, and you’ll hear the Wurlitzer really doing its thing. Then you’ll know what Arturia’s Wurlitzer V can do for you, too.

You can download demos, manual, updates and licenses at www.arturia.net