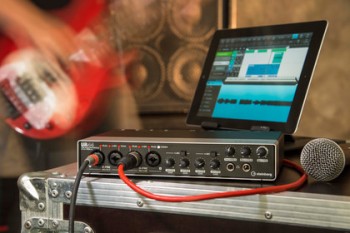 Most iOS recording apps like Auria or, indeed, Steinberg’s own Cubasis can record to large numbers of inputs at the same time, but finding that kind of hardware isn’t easy and most of what’s on offer is 2in/2out at best. Steinberg has added to its UR range of USB audio interfaces the UR44, which offers more with a 6-input/4-output device that has full iPad connectivity. Four of those inputs are Class A D-Pre microphone preamps with two line inputs on the rear making up the numbers. There’s also MIDI I/O, two separate headphone outputs with individual volume controls and, with a bit of thought, Steinberg has split the phantom power switching into two pairs rather than a global on/off across all four inputs. The UR44 comes with VST 3 versions of the onboard DSP plug-ins offering useful sound-shaping and FX tools: the Sweet Spot Morphing Channel Strip, the REV-X reverb and Guitar Amp Classics, all of which can tracked into your recordings and routed to the headphones, too. Steinberg’s dspMixFx software allows this with latency-free monitoring. As you’d expect, the UR44 is compatible with any DAW software and the iPad connectivity works with any iOS recording apps, not just Cubasis. However, working with iPads requires an Apple iPad Connection Kit and switching to CC Mode. If you’re tempted, note that of all the UR Series, only the UR44 has this iOS feature. Stocks should start shipping before Christmas and RRP in Australia will be $419.99. More at www.steinberg.net