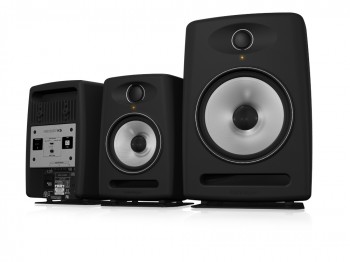 Let’s be brutally honest – for a long time a lot of sound engineers and musicians wouldn’t ever want to be found in the same control room as any Behringer gear. Actually, its Truth monitors were always pretty good except they had a high failure rate.

Things have changed in a big way. The Music Group, which owns Behringer, has teamed up (okay, it bought them) with some highly-respected names in music gear like Midas, Klark Teknik and brought in some expertise that has seriously lifted the profile of Behringer products forever.

So it was worth a quick check first – and no, The Music Group hasn’t snaffled up KRK, an established name in studio monitor manufacturing. But Behringer did lure KRK founding speaker designer Keith R Klawitter (thus KRK) into the office to help with Behringer’s new active near-field monitors. The 100-watt NEKKST K5 and 150-watt K8 next-generation, high-resolution near-field monitors come with ultra-high-resolution 1-inch (25mm) silk dome tweeters and long-throw glass fibre cone woofers; 8-inch (200mm) and 5-inch (127mm) respectively. An array of innovations, including a patent-pending means of switching between studio tunings, as well as ultra-linear DSP correction, multiple analogue and digital inputs, iOS and Bluetooth connectivity are included. Hooking up digital sources is accomplished via the onboard USB input. Analogue inputs feature XLR, TRS and RCA connectors – and can be used simultaneously with the USB source. Both monitors feature Bluetooth connectivity for streaming audio from a Bluetooth-enabled device. An iOS APP allows the user to adjust the K8/K5’s acoustic characteristics via iPhone or iPad. In addition, if you still don’t like what you’re hearing, users can download models of iconic studio monitors, as well as world-class “listening environments”. It all sounds quite tricky and clever, but how will they sound? With KRK in the mix, these have got to be worth checking out. More details are at www.behringer.com