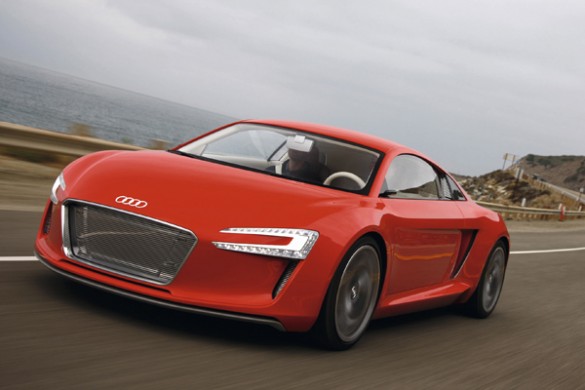 The mysterious business of “audio design” has a lot of explaining to do. In movies, when the factory lights are turned on they come to life one-by-one and make a huge clunking sound. Odd. And sound travels at the speed of light when the distant, ominous storm flashes lightning and rumbles thunder–at the same time. No wonder the boffins at the European Centre for Nuclear Research (CERN) with their whizzo particle accelerator are getting confused about Einstein’s theory of relativity–the scientists are watching too much telly.

But this is even more weird. Audi have been working on a commercially-viable electric car for years and its latest e-tron model has been deemed so smooth and silent… that it’s likely to sneak up and run over lots of unwary pedestrians (apparently there won’t be enough battery power to blip the horn). The answer is to design a signature motor noise that not only mimics a real car, but is “pleasing” to hear. According to Audi that’s a mix of sporty, yet recognizably electric, and the result is something reminiscent of the ‘80’s icon Kitt car of Knight Rider fame. Most of us have been trying to forget that, actually.

The current sound design engine-note varies depending on the position of the accelerator and comes from a 40-watt speaker attached to the bottom of the car. Possibly that means driving through puddles isn’t allowed.

Whatever happened to yelling abuse out the window, telling people to get out the way?