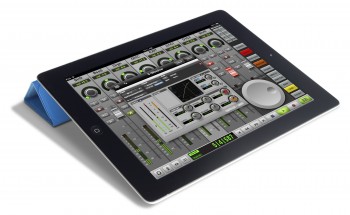 Again in the interests of making studio life easier for one-person, DIY recording sessions Neyrinck’s V-Control Pro provides a fully-featured, multi-touch control surface for most DAW software (yes, including Pro Tools) using WiFi to control transport, editing, and mixing functions. V-Control Pro also gives you advanced control of sends, automation, groups, auditioning, plug-ins, jog/scrub/shuttle, I/O assignment and other controls, plus V-Control can be used simultaneously with Ethernet controllers used by Pro Tools – with some restrictions, so check the fine-print. V-Control Pro is compatible with all versions of iPad including the iPad mini offering the same screen resolution as the earlier iPads. V-Control can connect to both Mac and PC and includes a host of app skins such as Audition, Cubase, Digital Performer, Final Cut Pro 7, Live, Logic Pro, MIO Console, Pro Tools, Media Composer, Reaper, Reason, Studio One, SONAR and Tracktion… the list grows all the time and each App skin includes faders, pans, mute and solo for mixing, high res metering, transport controls, as well as dedicated keys. The “Pro” in the name gives you the hint there is a freebie version, V-Control Free which only gives you the basic mix window with no extra controls – you’re probably going to find yourself going back to the main DAW after all, so forget it. The obvious application here is allowing single users to operate their DAW from the voice-over booth, from behind the drum kit, at the grand piano you have stashed in the corner… you get the idea. Neyrinck also point out that V-Control Pro is handy for controlling your software from the mixdown couch – no more dashing back to your sweet spot on the sofa after hitting the “play” button.

It’s fair to point out that V-Control Pro’s FAQ and Support pages are pretty chockers with known issues and a select, few stupid questions, but the all the answers and more are there, too. Neyrinck is there to help, if things go pear-shaped.