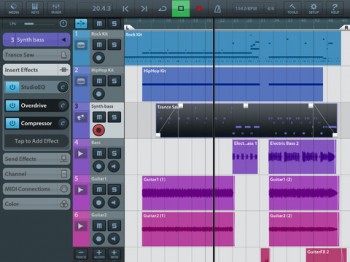 The original Cubase DAW for PC and Macs has been around a long time and is a much-respected and highly featured piece of software – one of the big players in the DAW market. Users of Cubase will embrace Cubasis, the iOS version, because the GUI is so familiar and the idea of initiating – or contributing to existing – studio projects is so easy. If you haven’t used Cubase before, Cubasis has a lot to offer. Specially designed for quick and easy operation, Cubasis does makes recording, editing and mixing simple. You can record tracks in CD audio quality, and edit your music with the Key and Sample Editors, then use the Mixer view for a final mixdown. There are also over 300 MIDI and audio loops and more than 70 virtual instrument sounds based on HALion Sonic – so no surprise it’s a 208MB download. Audio mixdowns and MIDI exports are both available, and the latest Cubasis version 1.3 has Audiobus support. Steinberg has opted to make Cubasis a complete DAW ready to go – you won’t find yourself taking a virtual trip to an in-app store to buy that missing gadget. That explains the price tag, but as we’ve mentioned elsewhere don’t make comparisons to $1.99 apps that promise the world and then consider Cubasis expensive. What you can achieve in Cubasis is well worth the price.