THE BEST HEADPHONES IN THE WORLD? 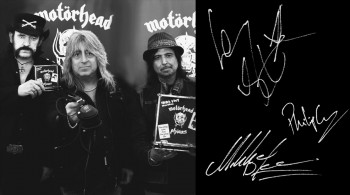 Apologies for the frequent quotation marks in this story, but let’s be clear just who is saying what. Dr Dre has some competition – with attitude. Motorhead, yes – the actual rock band –has released its own brand of headphones called “Motorheadphones” (fair enough). But these aren’t just any ordinary set of cans, apparently. Motorheadphones were developed by the “hard-rocking, mega-successful metal band”, who harnessed the energy of their own music and created a “life-style brand of headphones that are unprecedented in sound, capability and performance”. Motorheadphones are targeted to the rock audience – no surprise there – and feature professional audio quality, smooth warm bass, “bombastic drums” and clear mid-range, plus distinct high-end because of the 40mm neodymium high power speakers that takes 6-10 times more power than a standard headphone. Motorheadphones are smart phone capable and are equipped with the newly developed microphone “Controlizer, which is one of the most advanced remote controls on the market today”.  The product was recently named one of the best headphones in the world by UK’s newspaper, The Independent (which recently revealed the shoddy state of the plumbing in Westminster calling it “Urinegate”, so make up your own mind). A direct quote from Lemmy of Motorhead, “These new headphones are not like the weak-kneed, lily-livered, tin-pot, skinny sounding little pieces of garbage out on the market today. We designed these headphones to deliver everything louder than anything else and with the sort of range, clarity and true rock reproduction you’d expect from a band of warriors like us.”

We’re sure you’re getting the idea by now. The official US release was on January 8th at the Consumer Electronics Show in Las Vegas. You can find out more online at www.motorheadphones.com We’re chasing down any Australian distributor, availability here and prices.