PCI Cards are installed inside your computer straight onto the motherboard. These offer very stable and very fast data transfer rates, plus they’re high quality. The downside is they don’t give you a lot of hardware control like real knobs and switches–it’s all software-based. And, of course, for installation you need to be confident about digging around inside your PC or know (or pay) someone who is. Here are some examples of PCI soundcards. 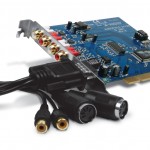 MAudio 2496: A straightforward PCI card with a long and well-deserved reputation for solid and quality results. 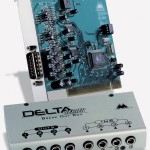 MAudio Delta 44: A step up from the 2496 with more connections and a break-out box to avoid fussing around the back of your PC.

Firewire interfaces use the IEEE 1394 port on your computer, simple known as (not surprisingly) a firewire port. Firewire is a popular protocol for professional devices using audio and video, but not much else. That’s a good thing, because it means nothing else like your mouse, printer, webcam… you name it, will try to steal bandwidth and ruin your recordings. The bad news is that firewire ports are becoming non-existent on laptop computers. If you want to go mobile, chances are you’re screwed. Check out these firewire interfaces. 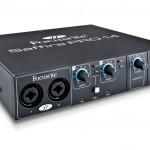 Saffire Pro 14: The Saffire Pro 14 offers 8 inputs and 6 outputs, but you need to be careful. Only two of those inputs are analogue preamps with combo connectors so they’re calling that four–the others are two line inputs and a digital SPDIF  (which counts for two). 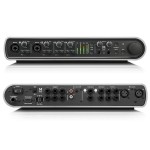 MBox 3 Pro: The MBox3 Pro can be bought separately, but you might as well spend the extra dollars and get Pro Tools 10 thrown in cheap–and you’re good to go. 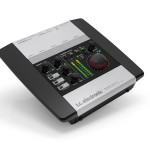 TC Electronics Desktop Konnekt 6: Does this work any good? Who cares, it looks cool! Actually it does work well. High quality with neat extras, but minimum connections to keep the price down.

Which means USB interfaces might be best, but as mentioned above unless you’re very careful about where you plug in a USB interface and how you install drivers, there’s a risk of “sharing” your PC’s resources, which can cause hassles. Have a look at these. 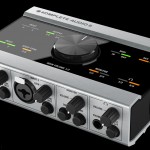 Komplete Audio 6: Native Instruments is better known for its VST plug-ins, especially . So buy one of its USB interfaces and you’ll get a bunch of free software for sure including Cubase LE6.

The Lexicon Omega: The Lexicon Omega has been around a long time–always a good sign. But again notice it only has two preamps. The rest of the promised 8 inputs are 4 line inputs and a SPDIF. 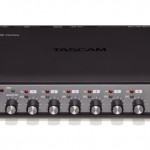 Tascam US800: Long before we were fooling around with DAWs Tascam gave us all kinds of tape-based recording systems. So Tascam knows its stuff. You get a genuine 6 XLR preamps- the other four are on the back.

Don’t stress. The Guerrilla Guide goes into heaps more detail about the pros and cons of each type of interface. There are a few other things to consider. How many analogue inputs do you really need? If you want to jam with a friend, two won’t be enough. Likewise with headphone inputs. Some interfaces give you more than one, which is handy. Also, some audio cards come packaged with great software. That might tip the balance in its favour. Look closely at the extras you’ll get.